Home
Stories
Exploring is in our blood
false

Exploring is in our blood

One of the fundamental reasons for the birth of TOBE Outerwear was our passion for exploration (and, of course, the benefit of having suitable clothing for the journey). A snowmobile or skis are optimal tools to discover new places, and no one has likely missed that this is precisely the core of our business. But last winter, we had the opportunity to take a slightly different way to discover unexplored places.

Meet Robert Björklin and his “Snövessla” (directly translated from Swedish to English, the word is “snow-weasel”). We get to hang out with Robert on a frosty February weekend in northern Jämtland, Sweden, where the annual Weasel meeting takes place. Enthusiasts from all over Scandinavia gather here once a year to share experiences and explore new terrain with their machines. Yes, you could also call it a kind of adult kindergarten. 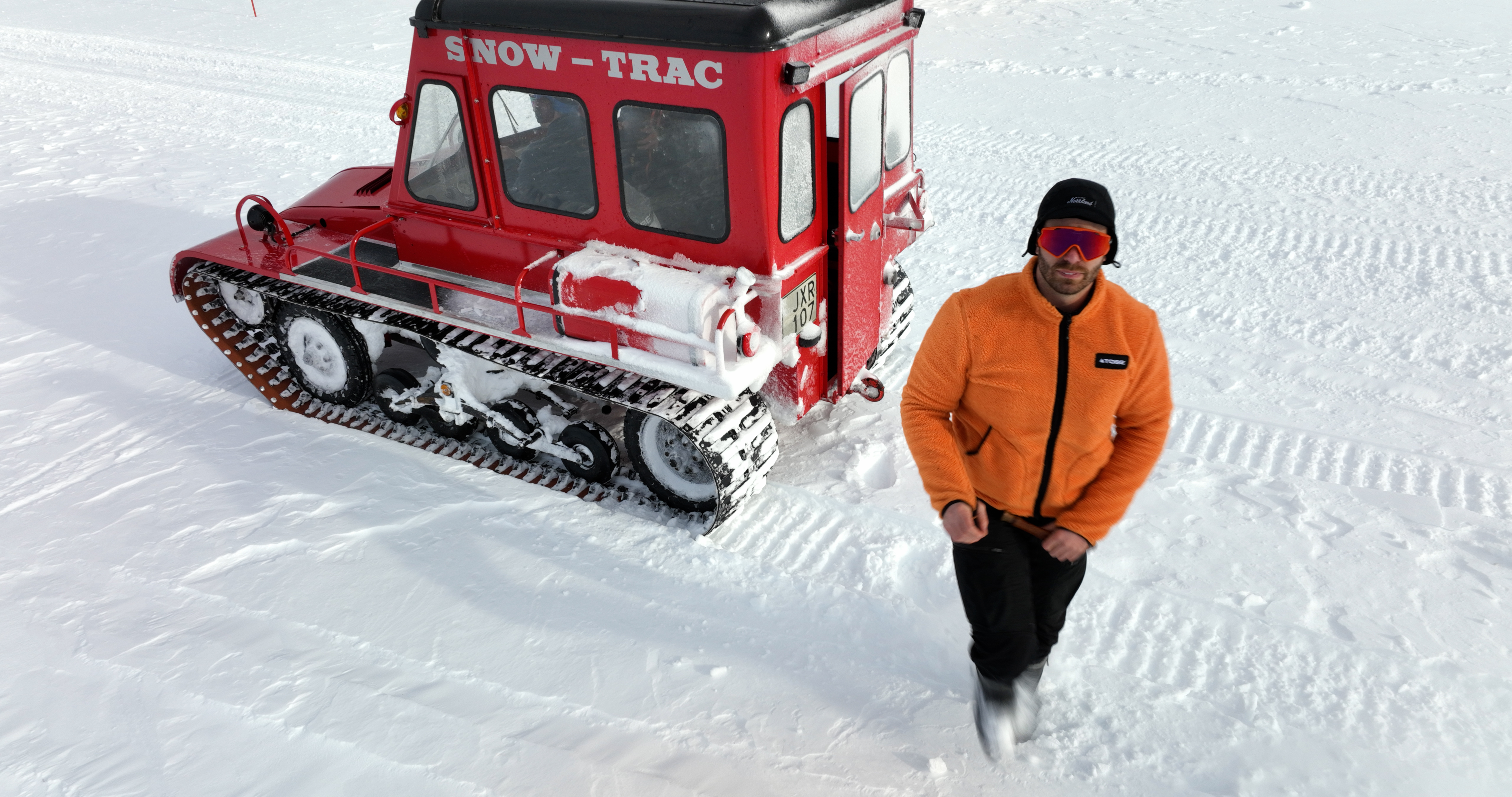 Alright, but what is a snow weasel? The Vessla (or Weasel) is a track-driven vehicle steered with a steering wheel. The engine is a gasoline-powered VW 1600cc industrial engine, very similar to the engine in a classic VW Beatle “Bubble.” The Weasel was manufactured in Southern Sweden by “AB Westeråsmaskiner” from 1957 to 1981. The company mainly produced agricultural machinery. One of the designers is said to have independently developed a track-driven snow vehicle to get to his remote mountain cabin in northern Sweden during the winter.

A prototype was created, and the company’s management decided to invest in the product and start a more significant production.

Over the years, most manufactured weasels have been exported to the American army, the Canadian telecommunications agency, a desert model for Afghanistan, and a snow groomer model for the Winter Olympics in Sapporo. After  production was shut down in 1981,  the production of spare parts also largely stopped; today there are still a few machines alive.

Okay, so what about this story, you might wonder?

Robert was one of the lucky ones to get his hands on this piece of history. This was not a shop copy but an original Vessla from the 1977 model year, which, during its lifetime, served as a school bus for children on a remote island in Northern Norway. The Weasel was sold for free against being transported away from its current owner. Robert jumped into the car to pick up his gem in Alta, Northern Norway, a solid 19-hour drive from Robert’s home in southern Sweden. The Weasel was still standing on the island in the Norwegian Sea, and sea freight needed to be arranged. Arriving at the port of Alta, Robert is met by a cheerful sea captain. A bit poorer after paying for the sea freight, Robert was delivered what looked like two caterpillar tracks and a hollow cabin. 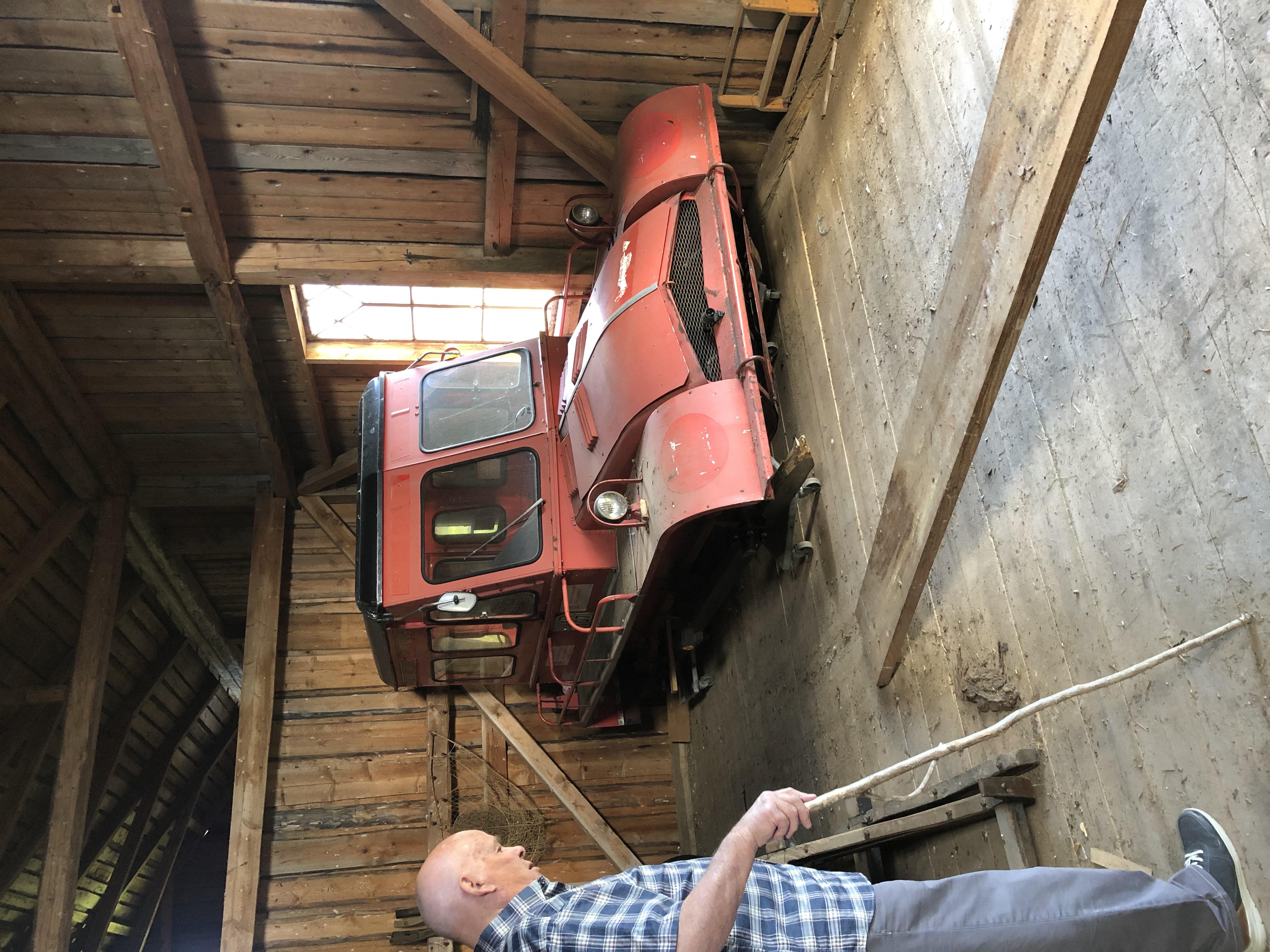 Life close to the salty waters of the Norwegian coast clearly had taken a toll on the Weasel, and Robert realized he was set to face a significant renovation. The fact that the machine had not been used in the past 20 years could have  been seen as a warning flag for an ordinary mortal, but for Robert, it was just a “fun challenge,” as he says. Back home, Robert increasingly realized that his trip to Alta had mainly brought more scrap to the yard, as the Weasel was in such poor condition. The chassis and engine managed to be saved, and an almost new body was found hidden in his father-in-law’s barn. Talk about winning the lottery! After that, a year of long evenings in the workshop started. The Weasel got a total renovation from top to bottom. Through contact with enthusiasts on Facebook, Robert was lucky to find some much-needed spare parts that allowed him to have a roadworthy machine for the winter. 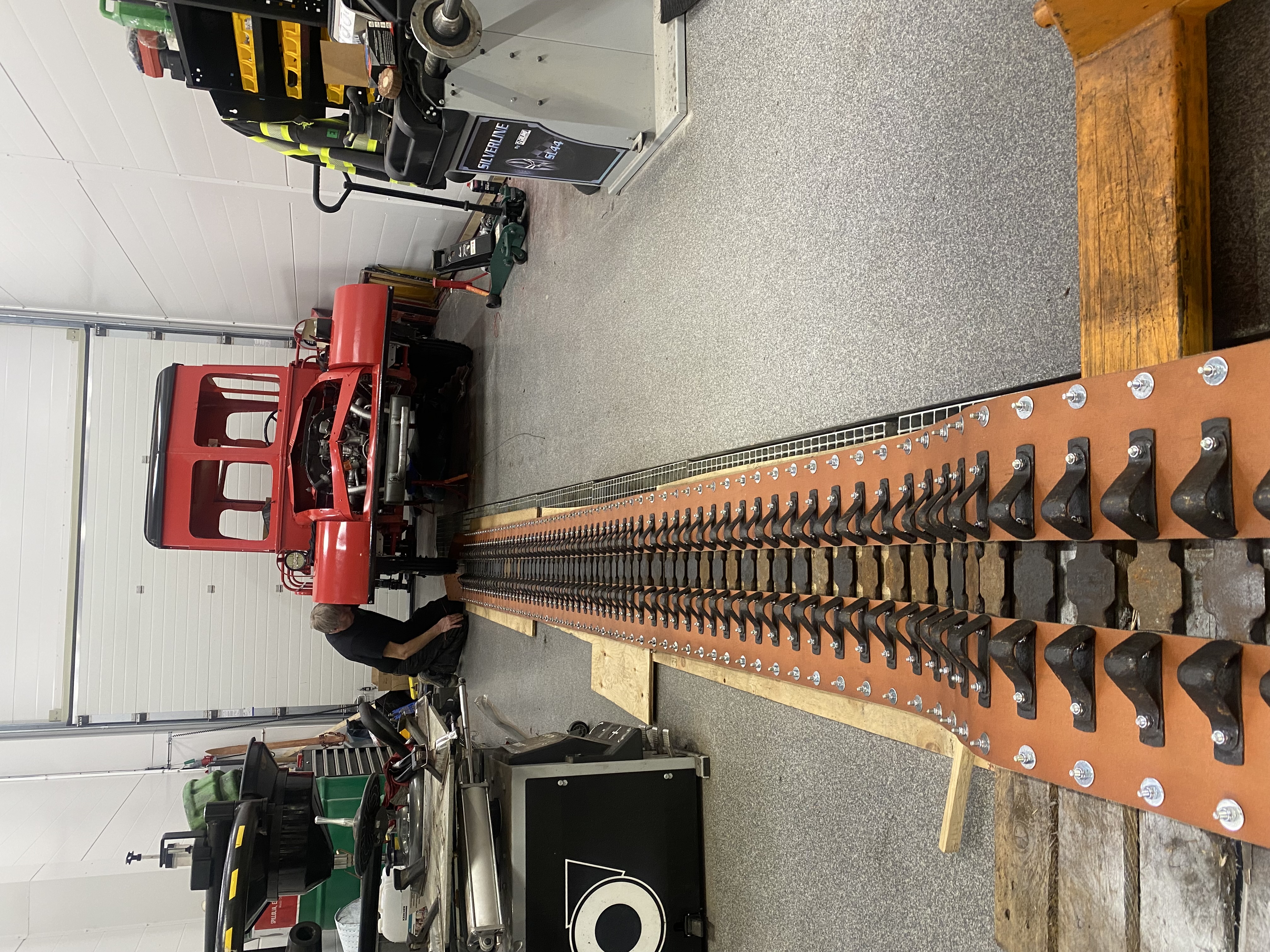 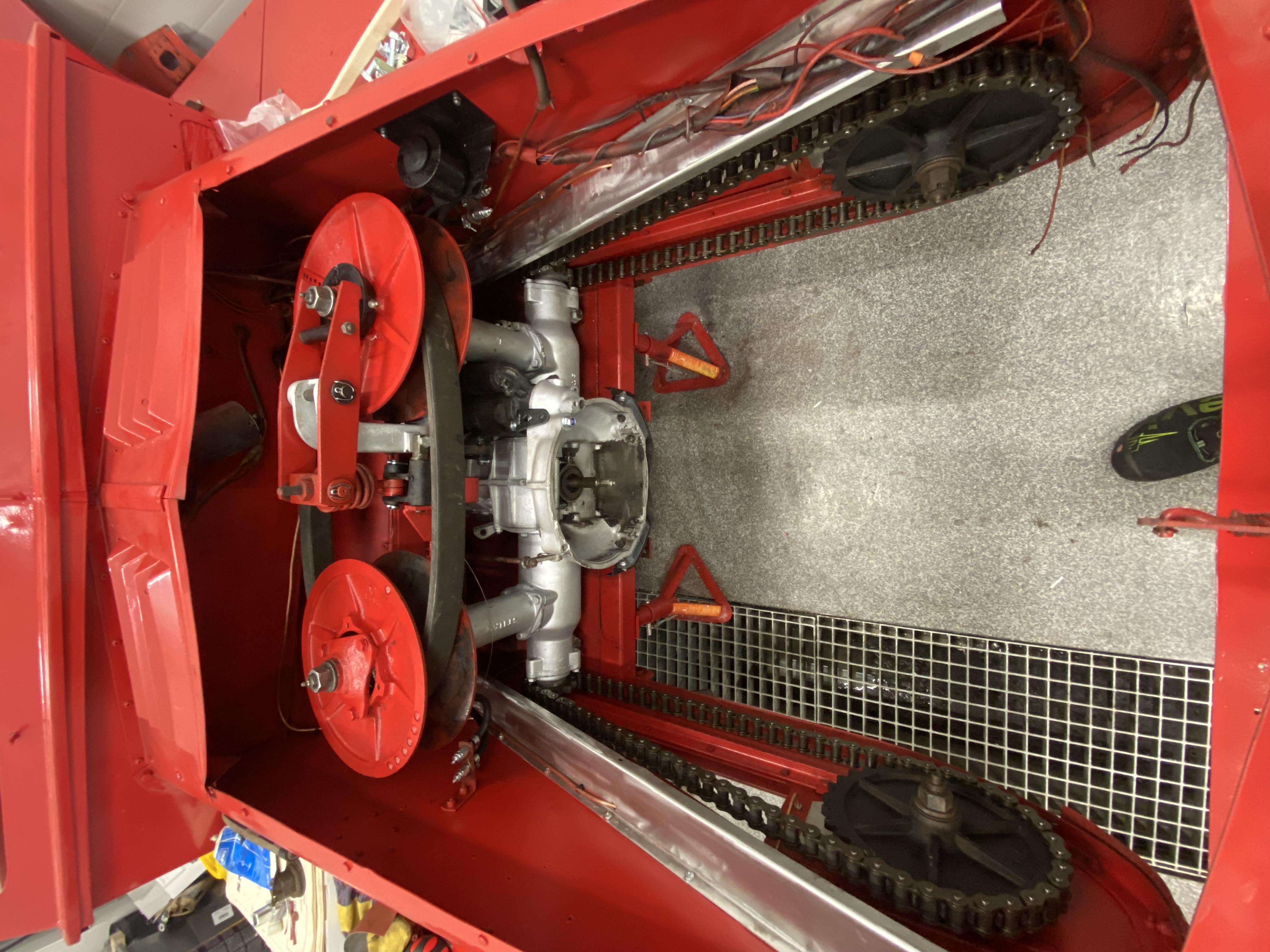 On a frosty morning in February, we meet Robert in Ljungdalen. A tiny mountain village in mid-Sweden close to the Norwegian border. It’s finally time for the first ride, and we all are excited to finally get our paws on this seemingly magical exploring machine. As we unload from the trailer, our imaginations run wild with thoughts of how many exciting trips the Weasel will take us on, and it’s the only thing we talk about. But, our daydreams and cheers are quickly stopped in their tracks when a cold and cranky 1977 VW engine refuses to start.

With some foul language and dirty hands, the Weasel finally starts. The conversations resume about winter camping on the mountain, where we could best strap our skis, and how endlessly far out in the wilderness this “dreamy” machine can take us. While climbing into the driver’s cabin, our imagination remains on how warm and comfortable this ride will be. How amazing to chit-chat with your friends while traveling uncharted snow and through beautiful landscapes. After all, the Weasel seats up to 6 people, including the driver.We meet up with the other enthusiasts at the “Ljungdalsvesslornas” annual weasel meeting. The sun is shining, and seemingly little can go wrong. 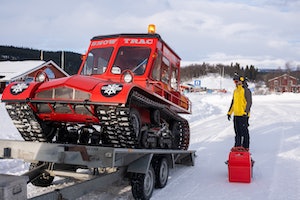 70 kilometers are cruised during the day, and all the weasels are put to what some might call a  severe test. It’s actually impressive how well the Weasel gets around in the snow. However, the vision of a comfortable ride with pleasant conversations in the warm cabin instead consisted of earmuffs, an overpowering smell of exhaust that required the back door open, and a spine that would have more to ask of AB Westeråsmaskiner’s suspension path. But no one cares about the minor setbacks in our vision of the Weasel. The fact you also must count on when driving these vehicles is the normality of a few breakdowns that require high mechanical skills and heavy tools to fix. But for this group, a 70-kilometer trip with a vintage vehicle from 1977 seems to go by without a hitch.. All 27 weasels make it around the entire tour, and no one sits idle around the dinner table that evening. Did we mention some participants even brought extra engines and a welding machine on the trip?

Because in the grand scheme of things, it’s the experience that counts, right? 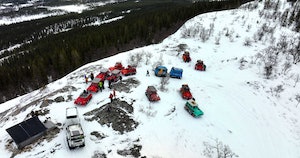